Denver is a city of alleys, not like, say, Portland (where dumpster diving is so much more difficult). In this video, Ravi and Matt (the bathhouse crew) rap their way through alleys in Denver until they discover some of what the alley holds…

Information about their work and upcoming events is available at partsandlaborunion.com. Some of Ravi’s artwork is also on display at Watercourse Foods, 837 E. 17th Ave, Denver, CO 80218. 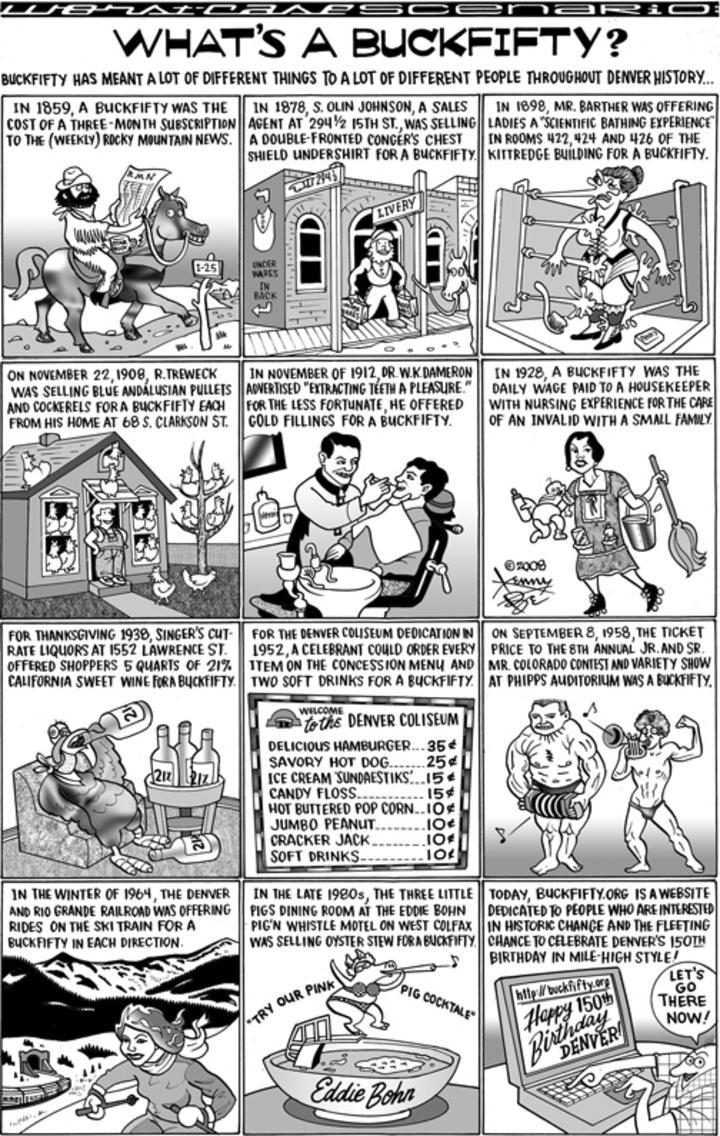 On November 22nd, 1858, William Larimer and a gang of town promoters from Kansas founded Denver City by crossing cottonwood sticks at the center of a one mile square plat on the east side of Cherry Creek at the confluence with the Platte River.

Of course, it wasn’t really theirs to claim, as it had been deeded to the plains tribes in the 1851 Fort Laramie Treaty, but Larimer made a deal with William McGaa, who had founded the town of St. Charles earlier in the year. McGaa would give up his rights to the city, and Larimer would give him whisky and name a street after him. It was a good deal all around (though the city leaders eventually took away McGaa’s street). Then on April 6, 1860, Denver merged with Auraria, located just across the creek – and the price of the deal, no surprise, was a barrel of whisky.

In the first two years of the city’s existence, 100,000 people came across the plains to Denver in search of gold. Of those, 75,000 would leave disappointed. In the past 150 years, Denver has pulled its ass out of the fire any number of times. Whether it was the flood of 1864 (or 1965), the silver crash of 1893, the great depression, the oil bust of the eighties, or countless other struggles, Denver and the people who live here have reinvented themselves through community, art, and story.

Over the course of the upcoming season we will offer up our favorite 150 different expressions of the city, its neighborhoods, people, and culture. All media whether in image, text, or video will be published. Along the way, we’ll be offering up some opportunities for getting together to share some new stories and some whisky too.

We hope that you will join us in celebrating Denver’s past and present, and in building our future. We welcome your input and your thoughts. If you are interested in submitting content to be part of the buckfifty, visit our how to submit page for more information.