Because It Had To Be Done 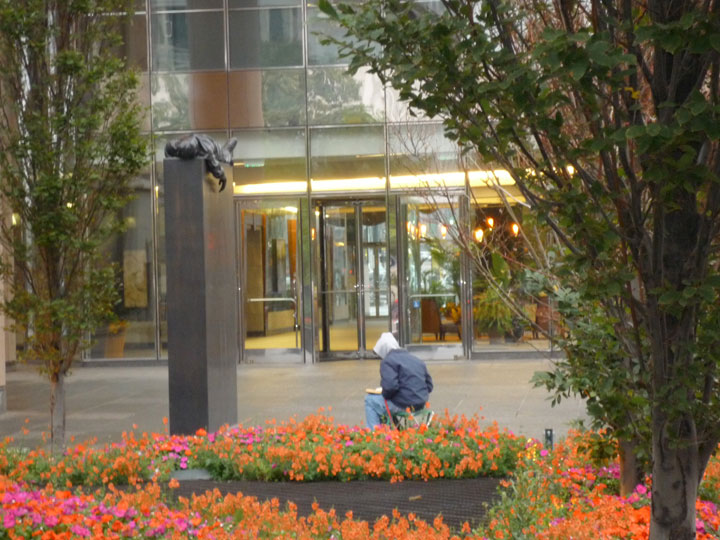 Those who know Don call him a saint, but he just shrugs off such idle talk. For the year that ended this Veterans Day, Don could be found each Saturday morning at the foot of the memorial to a fallen soldier, next to Holy Ghost Church, in the shadow of 1999 Broadway. He took this protest action on because, in his words, which I can only faintly reconstruct, it felt like it had to be done. Most Saturdays during the year, only Don and his pet sheltie Juliet could be seen between 8 and 9 in the morning. Some mornings, a few of Don’s friends or his nephew would stand by him. Sometimes the dogs outnumbered the people.

If you know the memorial, it is one of those sad scenes depicting the reality of war, a soldier draped with a blanket lying prone atop a ten-foot pedestal. Those who stood with Don on many of those Saturdays also recognize this spot as one of the coldest in Denver. At first, he might’ve raised a few eyebrows from the security personnel at the shiny high-rise beast that envelops the church and memorial, but they soon ignored Don and his motley attendants, who could be seen shivering out in the cold. Instead, the homeless who would visit Holy Ghost Church for a cup of coffee paid attention to Don; he could always be hit up for a bit of change or a dollar.

Through the summer, Don and his cohorts imagined if the Democratic National Convention would pay attention to this protest, but it seems that the feds were much more interested in masked activists. Not a fellow who makes his voice heard in more private ways. Not a middle-aged slightly built man bundled up sitting on a campstool reading Thomas Merton. Not someone who will always give money to a person asking for a handout. Certainly not a person who had gathered at this same memorial some twenty years earlier in support of Vietnam veterans gathered for peace; he sometimes arranged food for their meetings, even though he had not served in that war. The DNC paid Don no attention. So, there never was publicity. Only the regular weekend drivers and riders of light rail might have noticed Don. But that was fine with Don – it still felt like it had to be done.

1 Response to Because It Had To Be Done