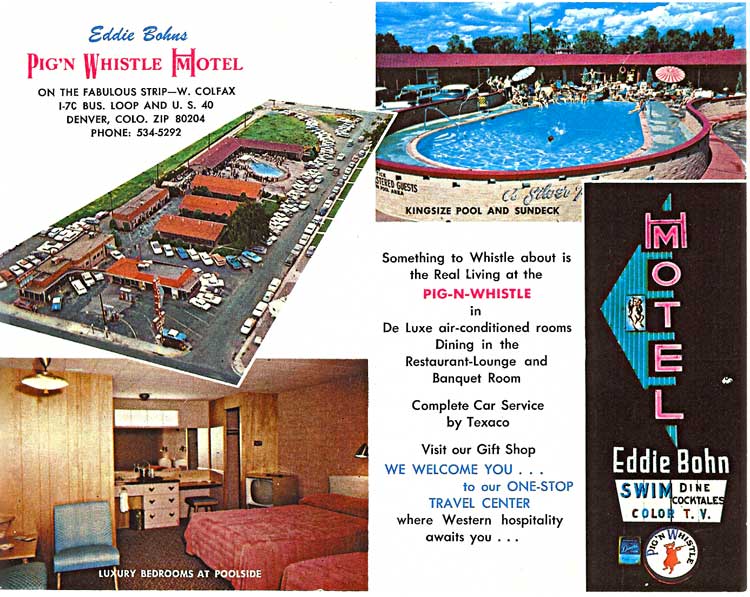 When Colfax Avenue was “Colorado’s Main Street,” a miles-long constellation aglitter with motels, restaurants and gas stations, Eddie Bohn’s Pig ‘N Whistle was its brightest star. Bohn was dubbed the King of West Colfax, and from his throne at “The Pig,” as regulars affectionately knew his motel and restaurant, he presided over an empire the likes of which North Denver will never see again. Visitors included Jack Dempsey, Roy Rogers, Babe Zaharias, Jimmy and Tommy Dorsey and Wally Schirra, to name but a few. For 65 years the Pig ‘N Whistle and its larger-than-life proprietor reigned on West Colfax, and North Denver basked in their reflected glory.

Earl W. “Eddie” Bohn, born in 1902, was the son of German immigrants who owned the J.J. Bohn Brush Company at Colfax and Wolff where they made corn husk brooms for industrial use. Eddie attended Sacred Heart School and early in life showed a head for business. As a youngster he launched the Rocky Mountain Skunk Company, with business cards promising, “There’s more profit in one skunk than there is in a dairy cow, with less work.” He persuaded his father to buy land at Colfax and Wolff. “I was 14 at the time and planning a boxing career and told him that when I got older, I’d buy back the land and build a car agency,” he told the Lakewood Sentinel in 1982.

“I never went very far in school and I didn’t learn very much when I was there, but I sure learned a hell of a lot on the way there and back,” he once said of his early interest in boxing. When he was 18 the six-foot, four-inch Bohn headed to California on a motorcycle to seek his fortune. He soon took up boxing and fought 64 professional matches, winning all but two bouts, which he tied. He was crowned Rocky Mountain Heavyweight Champion in 1924. He hired on as Jack Dempsey’s sparring partner, earning $100 for each round with the Manassa Mauler. “Each round he would tell you that he was going to throw one good punch, but he never told you when it was coming,” Bohn recalled. He and Dempsey became lifelong friends. “He was a helluva guy,” said Bohn.

With sparring proceeds for a grubstake, Eddie bought the four lots on Colfax from his father and in 1924 opened a gas station and barbecue joint there. He’d been impressed by a chain of West Coast restaurants named the Pig ‘N Whistle and adopted the uncopyrighted name for his own business. His timing was perfect. The Federal Aid Road Act of 1916 and the Federal Highway Act of 1921 called for creation of “an adequate and connected system of highways, interstate in character” and the nation embarked upon an era of highway construction. U.S. Highway 40, which transited Denver along Colfax and passed right by Bohn’s front door, was born of that legislation.

U.S. auto registrations tripled in 1920s as auto-oriented businesses blossomed. The Motel Inn, which opened in San Luis Obispo, California, in 1925, is generally considered the ancestor of today’s motels. Enterprises such as the Alamo Plaza Hotel Court chain in the South, began appearing in the 1930s. With money lent by his friend, U.S. District Attorney Tom Morrissey, Bohn built four motel units to make the Pig ‘N Whistle Denver’s second motel. The business drew nourishment from increasing traffic on Colfax and also attracted Denverites to its restaurant and bar.

Bohn loved people. “Eddie was one in a million,” chuckles Mike Scherer, longtime friend of the Bohn family. “He was a real character. A self made man. Just a people person.” Bob Slattery, another of Bohn’s lifelong friends, adds, “He knew everybody and everybody knew Eddie. He was very genial.” From his perch at the end of the counter, he greeted everyone who entered. “He’d come and join you and if you were settin’ there and had French fries, he’d probably eat half of ‘em. Then he’d order more for you,” laughs Slattery. “He was tougher than a three-dollar steak,” jokes Scherer. “Very outspoken. He had an opinion on everything. If you didn’t agree with it, he didn’t care. But he was very loyal to his friends.” Beneath that crusty veneer Bohn had a soft heart, says Slattery. “He was very charitable, and his wife was very charitable, too. He’d gripe about her giving food away to somebody but if she didn’t do it he would do it himself. They were wonderful people.” Eddie’s wife Janet, “was there full time right alongside my dad,” says their son Eddie “Punch” Bohn. “When you run a restaurant you have to do everything and she was the bookkeeper, bartender, cook and waitress.”

Bohn loved hunting and fishing and his favorite television show was “Mutual of Omaha’s Wild Kingdom.” “If that was on, Bohn would turn the channel to ‘Wild Kingdom,’” recalls Scherer. “Everybody knew not to say anything. If the people at the bar wanted to watch something else, he’d tell ‘em to go to somebody else’s bar.” The atmosphere was another attraction. “He had a sports bar before anybody ever heard of one,” says Scherer. “The walls were covered with photographs of people that you’d recognize. A lot of boxers. Another thing that he was known for, he had one of the best barbecues in town. His ribs were the best.”

The Pig was a mecca for pugilists. “Anybody that was in the boxing business, when they’d come through Colorado they’d be there,” says Scherer. Bohn dubbed Room 39 the “Jack Dempsey Room” to honor his friend and frequent guest. Other famous boxers who stayed there were Max and Buddy Baer, Primo Carnera, Gene Fullmer, Carmen Basilio and Gene Tunney.

The Pig attracted other big names. Before becoming manager of the New York Yankees, Billy Martin managed the Denver Bears and lived at the Pig ‘N Whistle during baseball season. After joining the big leagues, he often returned at season’s end to wind down for a week. Scherer, to whom Bohn introduced Dempsey and Basilio, also met Martin there. “When one of my kids was about 10 years old we went over there on a Saturday morning to get some breakfast and Eddie said, ‘Come on back and sit down. Billy’s here.’ It was Billy Martin. You could go in there and see somebody like a very prominent state judge or a politician. A couple of booths away would be a bunch of baseball players. Next to them might be a bunch of ranchers. That’s what made the place so interesting, people came from so many different walks of life. You never knew who you were gonna’ see.”

While in town to play at Elitch’s Trocadero or Lakeside’s El Patio ballrooms, big bands like the Vic Jurgens and Eddie Howard groups stayed at the motel. Jimmy and Tommy Dorsey once honored its owner with “Eddie Bohn Night” at the Trocadero.

The restaurant was also a favorite haunt of area notables. Governors “Big Ed” Johnson, Steve McNichols and his mayoral brother Bill were familiar faces at the Pig. Fred Dickerson, Tom Morrissey, Tony Zarlengo and Mike Pomponio, heavyweight North Denver Democrats, were regulars. Chet Nelson, sports editor of the Rocky Mountain News, and his wife Sammy were close friends of the Bohns and could often be found at the restaurant. Bob Palmer, long time news anchor at Channel 7, ate there frequently.

Although many guests belonged in Who’s Who, Bohn welcomed everyone on equal footing. “It didn’t make any difference whether a guy was the governor or a plumber. Everybody was the same to him when he came through that door,” says Scherer. His handshake was memorable. “He had such enormous hands he would just engulf your hand inside his. It felt like you had a bear wrapped around you.”

Bohn was active in many professional groups promoting travel-related business and Northsiders elected him to the state legislature in the late 1930s. It was his tenure on the Colorado Athletic Commission, however, that was his most famous public service. Appointed and reappointed by 15 Democratic and Republican governors, he served from 1934 until 1977 and was chairman for two decades of the body that regulated Colorado boxing and wrestling. “Being an ex-boxer, he watched out for the boxers,” recalls Slattery. “He wanted to be sure that everything was on the up-and-up. He wouldn’t allow things like they did in Las Vegas.”

Highway changes in the 1950s and ‘60s sent West Colfax into decline. The aging Colfax Viaduct was closed, severing the artery that delivered downtown diners and cross-town travelers. Colfax businessmen lost a battle with the Colorado Department of Transportation over what Punch Bohn calls “confusion junction,” the intersection that bends Colfax-bound traffic onto 6th Avenue Freeway. Interstates -25 and -70 were built without exits for West Colfax, choking traffic flow even further. A colorful chapter in North Denver history ended when the Pig ‘N Whistle closed in 1991, the year after The King of West Colfax passed away.

Article reprinted with permission of the North Denver Tribune.