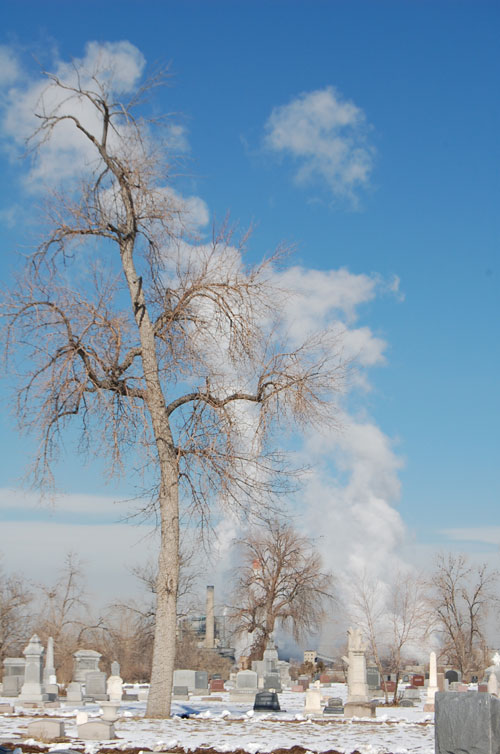 Riverside has been dying for a long time.

One of the first cemeteries in the american west designed as a park, with paths for carriages, and trees for shade, and roses, for a generation or so Riverside served as the resting place of the pillars of society, territorial governors and mayors and pioneers and publishers. It was filled with statuary and civil war heroes and abolitionists and shady characters and mothers who died in childbirth, and lots of children who died too young.

But it was downstream from the city, in an industrial area near the city of commerce, and it ended up on the wrong side of the tracks. Even before the Railway line came through, the wealthy had moved on to another part of town. Riverside was left to the working men and the working women, to immigrants and laborers and indigents.

And so there began a long, slow decline, the slow death of a place honoring the dead, exacerbated by the western thirst for water. It’s too far gone now, in many ways. Trees have died, and roses, and there will never again be kentucky blue grass between the graves. In the end, the old resting place will settle back into the dusty plains, as we’ll all settle into oblivion.

There is something profoundly human about the desire to immortalize ourselves with a mark in time. Perhaps it explains the creative impulse, the desire to say “I was here, now.” Or to commemorate a loved one with as generous a statement as you can afford.

In the early days of the american frontier, the cemetery was a primary form of expression, perhaps the only way for most people to say, I was here. I loved. I made my mark. And there is sadness in the realization that of all the monuments, each one for someone who lived and loved and died, so few stories survive.

There is an austere beauty to the prairie, and at Riverside it’s poignant given the location between the smelter and the refineries. It’s not a traditional beauty, not fecund and rich and fertile, but more elusive and fleeting and dry. Like the west, the prairie scene doesn’t give away it’s secrets. They are too valuable to waste on the unobservant.

Times change; the cemetery is no longer the tradition it once was. Burial is now the exception rather than the rule. Still, there’s something to looking to the past, something to gain from saving what’s left of this history.

For a while at least. Until oblivion.

B50 Note: Founded in 1876, Riverside Cemetery is Denver’s oldest, and is the final resting place of a fascinating cultural and social cross-section of the community (including three territorial governors and three civil war medal of honor recipients). It is also the home of amazing statuary that documents 130 years of colorado history. Unfortunately, all irrigation was suspended in 2002, so the landscape has suffered extensively. Members of the community have joined together to support the cemetery through the Friends of Historic Riverside Cemetery.