Before dawn on the 29th of November 1864, a force of 700 soldiers under the command of Colonel John Chivington attacked the sleeping camps of Cheyenne and Arapaho at Sand Creek in what is now Southeastern Colorado. Over 150 tribespeople were killed that day, mostly women, children and elders. Though the American soldiers were initially hailed as heroes upon their return to Denver, within weeks a congressional investigation has been started and the “battle” had been renamed a “massacre.” More information on the Sand Creek Massacre National Historic Site is available from the National Park Service website.

For the past 10 years members of the Cheyenne and Arapaho tribes have organized the Sand Creek Massacre Spiritual Healing Run as a way of bringing closure to this pivotal event in the history of the American west. The 10th annual Sand Creek Massacre Spiritual Healing Run is taking place November 27-29th, 2008. For more detailed information, download the event brochure.

The following letter was written by Captain Silas S. Soule, who was present at Sand Creek on the 29th of November, 1864. Soule was assassinated in Denver in April of 1865 (close to what is now the corner of 15th and Arapahoe), most likely due to his refusal to fire at Sand Creek and his subsequent testimony against Colonel Chivington. 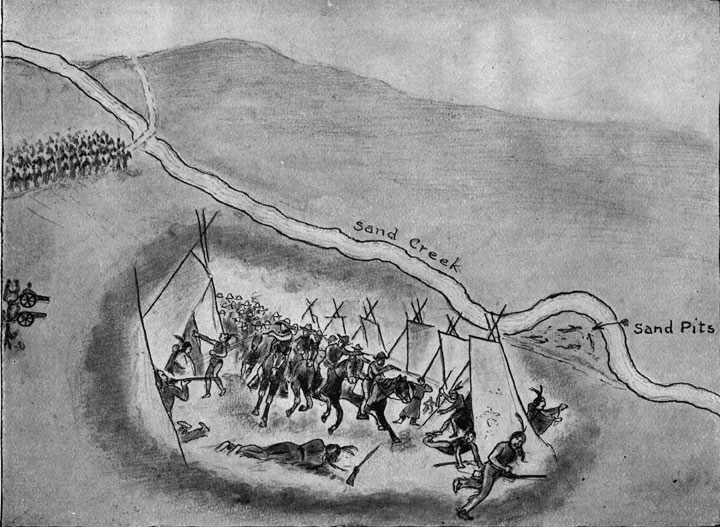 Two days after you left here the 3d Reg’t with a Battalion of the 1st arrived here. They then declared their intention to massacre the friendly Indians camped on Sand Creek. As soon as I knew … I was indignant … and told them that any man who would take part in the murders, knowing the circumstances as we did, was a low lived cowardly son of a bitch. Chivington and all hands swore they would hang me before they moved camp, but I stuck it out, and all the officers at the Post, except Anthony backed me.

I was then ordered with my whole company to Major A with 20 days rations. I told him that I would not take part in their intended murder, but if they were going after the Sioux, Kiowa’s or any fighting Indians, I would go as far as any of them. They said that was what they were going for, and I joined them. We arrived at Black Kettles and Left Hand’s Camp at day light.

Anthony then approached to within one hundred yards and commenced firing. I refused to fire and swore that none but a coward would. for by this time hundreds of women and children were coming towards us and getting on their knees for mercy. Anthony shouted, “Kill the sons of bitches”. When the Indians found that there was no hope for them they went for the Creek, and buried themselves in the Sand and got under the banks and some of the bucks got their Bows and a few rifles and defended themselves as well as they could.

By this time there was no organization among our troops, they were a perfect mob every man on his own hook. My Co. was the only one that kept their formation, and we did not fire a shot. The massacre lasted six or eight hours, and a good many Indians escaped. I tell you Ned it was hard to see little children on their knees have their brains beat out by men professing to be civilized. One squaw was wounded and a fellow took a hatchet to finish her, she held her arms up to defend her, and he cut one arm off, and held the other with one hand and dashed the hatchet through her brain.

One Squaw with her two children, were on their knees, begging for their lives of a dozen soldiers, within ten feet of them all firing – when one succeeded in hitting the squaw in the thigh, when she took a knife and cut the throats of both children, and then killed herself. One old Squaw hung herself in the lodge — there was not enough room for her to hang and she held up her knees and choked herself to death. Some tried to escape on the Prairie, but most of them were run down by horsemen.

I saw two Indians hold one of anothers hands, chased until they were exhausted, when they kneeled down, and clasped each other around the neck and were both shot together. They were all scalped, and as high as half a dozen taken from one head. They were all horribly mutilated. One woman was cut open and a child taken out of her, and scalped.

White Antelope, War Bonnet and a member of others had Ears and Privates cut off. Squaws snatches were cut out for trophies. You would think it impossible for white men to butcher and mutilate human beings as they did there, but every word I have told you is the truth, which they do not deny.

I expect we will have a hell of a time with Indians this winter. We have (200) men at the Post – Anthony in command. I think he will be dismissed when the facts are known in Washington. Give my regards to any friends you come across, and write as soon as possible.

At 8am on Saturday, November 29th, there will be an honoring ceremony at Riverside Cemetery in Denver, where Soule is buried. The healing run then continues on for an 11:00am presentation at the Colorado State Capitol and a noon reception at the Colorado Historical Society, 1300 Broadway, Denver. Everyone is welcome to attend this event.