This memorial is the property of the State of Colorado
—
This is the Southwest corner of
Camp Weld
established September 1861 for
Colorado Civil War Volunteers,
Named for Lewis L. Weld, first
Secretary of Colorado territory.
Troops leaving here Feb. 22, 1862
Won victory over Confederate Forces
at La Glorieta, New Mexico. Saved
The Southwest for the Union
Headquarters against Indians 1864-65
camp abandoned 1865
_

erected by
The State Historical Society of Colorado
from
The Mrs. J.N. Hall Foundation
and by
The City and County of Denver
1934

B50 Note: This monument is located at the corner of 8th and Vallejo Streets in an industrial section of Denver criss-crossed by highways and overpasses. Check out the “Drive By History” series of unnoticed monuments in Denver.

On September 28th, 1864, the Camp Weld Council was held at this location. At this meeting, territorial governor John Evans met with Cheyenne and Arapaho Chiefs, including Black Kettle and White Antelope. The Arapaho and Cheyenne left the council believing that if they returned to Fort Lyon (in what is now Southeastern Colorado) they would be able to live in peace with the white settlers. Two months later (on November 29th, 1864), their camp at Sand Creek was attacked and many were massacred by Colorado Volunteers under the command of Colonel John Chivington.

A transcript of the meeting is available on Kevin Cahill’s very informative site, kclonewolf.com. This photograph was taken following the Camp Weld Council, and includes many of the participants (photo courtesy of the Colorado Historical Society). 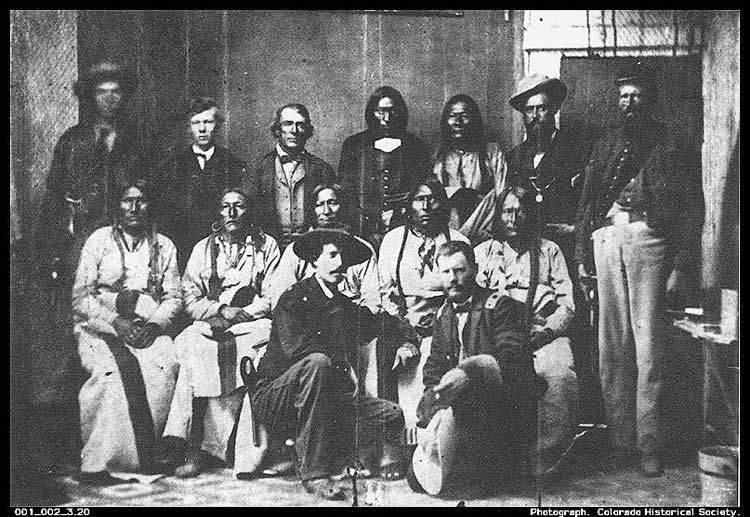