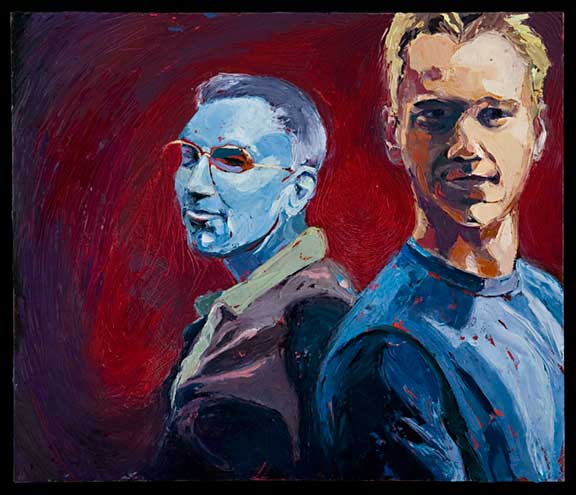 All wondering how Denver and I have settled in report is outstanding. I watch their city, Race and 13th street anyway, these 5 (FIVE!) windows. Two original dormers in my old, old apartment light to place up. I watch the snow swirl, musing. I tend to loath snow. Sharon pines for it. It been splendid winter for anybody on two wheels.

Yes, Denver fits nicely. Thanksgiving 2005 was another story, fixed with dread, hoping my son’s cancer would just go away, or get creamed by Children’s Hospital’s medical armada, where Jasper tooks lungs, and the head. New words, like glioma, ice-cold, nastier that oath. The guy at Sanora coffee, over on Colfax and Lafayette, would not take our money that day, Patty and I, wandering while he slept, bunkered down in ICU.

I have no real memories of Denver before this. Later, after little shoah, I hand make my peace with Denver, which wasn’t all the easy. It was very damn pissed at everything. I can’t remember at what. Everything.

Maybe Denver’s now-warm blanket of love, the love I’ve received since, is Denver’s gift to me. Maybe it felt it owed me something. Everywhere I turned Denver took me in. Everywhere. You know I’d give it back, walk through the very gates of hell, could it have turned out differently. But … here I am.

Downing street in time became my corridor, on the way to everywhere. As I passed, Children’s loomed, quiet, steely. I’d glare at it, or avert my eyes, keep looking straight ahead. I did not want to give it satisfaction. It was golgotha, somehow alive, and I shared space with this thing and could not wrap my mind around it existence. It gave me chills. It closed windows and screamed and screamed and cursed it, my face screwed up in wrath and fear, wishing to GOD it had all played out different way, nightmare from which I could not wake.

One fine day, Children’s was torn down. That mixed me up bad. Its dismemberment seemed to take forever. The demolition was jarring, its insides sat raw and open, rooms and hallways, where so many had passed in pain and anguish, now being torn to hell by giant machines. And I was torn between perverse glee, and wrenching sorrow; I wanted it GONE but good, yet I wept as it fell, sorry this place that cradled my son was finally dying too. The destruction took forever. It was a sore, and as sore, and even as hoses flattened the dust and rakes smoothed what remained the empty space was still maw, and I was angry at that, too. Angry was angry it gone. Later on, I ran into one of the nurses that had cared for Jasper. She said was not alone, and these destruction of Children’s had sown confusion, torn big holes in hearts citywide.

By the Sharon, and her family, had taken me in. Three years later, I float through Denver as if I’d always been here. I have my places, my routine. My barista sees me coming, shots are grinding before I walk through door. I thread 14th street traffic like river, the slowpokes lurk, feinting and dodging potholes by memory. A memory!

That Denver should have welcomed me at all was unexpected. Starting life over at 50 in a strange city could easily be the kiss of death; every corner is proof enough. But Denver parted its wings, and softened my blow. Qwest picked me up. I ran into Sharon at Starz, almost 25 years after Aspen, where where we both children, and were so many things. Now we are more.

Sharon and Denver scooped me up, my crystal-delicate emotions, my leathery psychic hide. I am very much “Ink*”; She coaxes me out my armor, untying my knots. Her boys scream “E”! and reach for my yo-yo, or whatever gadget I’m messing with that day.

Children’s Hospital’s old carcass, I’ll never quite adjust to. I THINK the ghosts have all gone home. The old buildings that remain, I’ve given them a pass. Places come and places go, it’s the flow of history, and I’m not alone, it’s all part of the dance, and my small waltz connects me to Denver’s grand ball. My memories are new, and raw, and I wander, Lakewood to Aurora, Littleton to Globeville, I’m seared, and Sharon and the boys reminds me why I should heal. I share fires at Ironton with new friends, and sit among its gardens, and sometimes I shake off all my shell. I imagine my ghosts are OK, and Denver’s my home.

*Ink is movie, and Ink is title character. Their story involves father trying to save his child, his daughter take by Ink across the dreamtime. In end, I could not save Jasper. Their movie is extraordinary, steep in archetype and allegory. And destined the cult status movie speaks to redemption, forgiveness, and healing. To filmed, in Denver. Go see it. More about Ink on IMDB.