This is Carlos Fresquez’ digital story titled “Rhythm of the Neighborhood” from the Colorado History Museum’s Imagine a Great City: Denver at 150 exhibit. This story was made in a workshop facilitated by The Center for Digital Storytelling’s Denver office. Posted in conjunction with Mile High Stories.

Carlos is now Assistant Professor of Art at Metropolitan State College of Denver, where he works in the same Auraria neighborhood he visited as a child. You can find out more about Carlos from this article from the Metro newspaper. 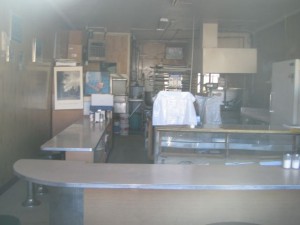 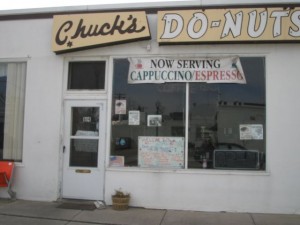 This is a statement submitted in an application for a house in the Baker neighborhood to be placed on the National Register of Historic Places. As a result of this successful application a new term for the architecture was coined: “Hobo Craftsman”.

Three houses on South Fox Street at Ellsworth Avenue, in the Baker neighborhood, were hand-built by Henry Roth in the Bungalow or Craftsman style of architecture. He made ingenious use of cobblestones from the South Platte River, metal barrel-lids from canisters of railroad spikes, and other found and recycled materials. He built the houses from 1927 to 1941, during the time of the Great Depression with its transient populace. Located only a few blocks from the railroad line, many people looking for work wandered the neighborhood. Mrs. Roth handed out sandwiches at her back door. This was also the time when tourist camps and motor courts spread throughout America. These cobblestone houses not only reflect the Craftsman style of building, but their orientation in conjunction with the sheds on the property represent the typical grouping of cabins in a motor court. Henry Roth’s occupation as a cooper aided him in making use of salvaged metal barrel-lids to construct the sheds, which served as sleeping quarters during the 1930s. The landscaping is reminiscent of tourist camps located near rivers, where fast growing trees like elms and honey locusts are prevalent. Common lilacs provided a sense of hospitality. The buildings and grounds have been preserved, and represent a historical period in America when people were struggling to make ends meet. Henry Roth built the houses for his family, and built the sheds for income. He used materials that other people overlooked or dumped. These houses stand in marked contrast to the neighboring Baker Historic District in Denver, where Victorian houses built at the turn of the twentieth century are the norm.

END_OF_DOCUMENT_TOKEN_TO_BE_REPLACED

The Muddy’s idea began in 1975 as the brainchild of Joe DeRose. It started as a debating club for a few graduate students from Colorado University. They found a place in an old downtown hotel that was on the lower end of its declining years. It was a marriage of convenience—cheap rates, poor students. Too soon, urban renewal broke up this union, forcing the students to scurry about fifteen blocks up into north Denver, where they reopened.

The place quickly morphed into a bookstore that couldn’t support itself. In desperation they added coffee, then pastries and sandwiches and finally an old manual lever espresso machine. Although the birth canal had been strange, what emerged was a full-fledged Coffeehouse, “Muddy Waters of the Platte Inc.” It spent the next ten years surviving on a month-to-month lease, under the mainstream radar and against all odds.

It became a wildly successful “Bistro of the night,” open from seven in the evening until four in the morning, seven days a week. Along with the bookstore-coffeehouse, it added The Slightly off Center Theater, all in the same building. Now there was a place for Music, Plays, life-drawing classes and the piece de resistance, Muddy’s “Summers of Jazz Concerts.”

Muddy’s hosted all of the governors of Colorado and all of the Mayors of Denver from when it opened until it closed its doors in 1997. However, that was only a small part of Muddy’s patina, because it also caught the tail end of the “Beat” generation. Pontifical greats like Ken Kesey and Alan Ginsburg railed against man and machine in our confines.

Jack Micheline headed a list of great poets who spoke their lyrical prose on Muddy’s stage. Both the known and the unknown poet mixed pentameter and hexameter for all who would listen and then strode out the doors leaving their ambience behind.

What made Muddy’s worth writing about was not only who came and went, but also what happened to people while in its ethereal grasp. The real importance lay in its ability to expose people to each other by gently mixing together the grist of their characters, laying bare what was and wasn’t known about each other. It forced us to look at ourselves through the eyes of our contemporaries, some of whom had dared to live outside that damned mainstream box; showing us that social oxygen exists everywhere.

Author Bill Stevens will be signing copies of his new book, “Muddy’s Chronicles: Secrets of the last Great Coffeehouse” on Sunday, Dec 21 at 2 p.m at the Mercury Café. Admission is Free. 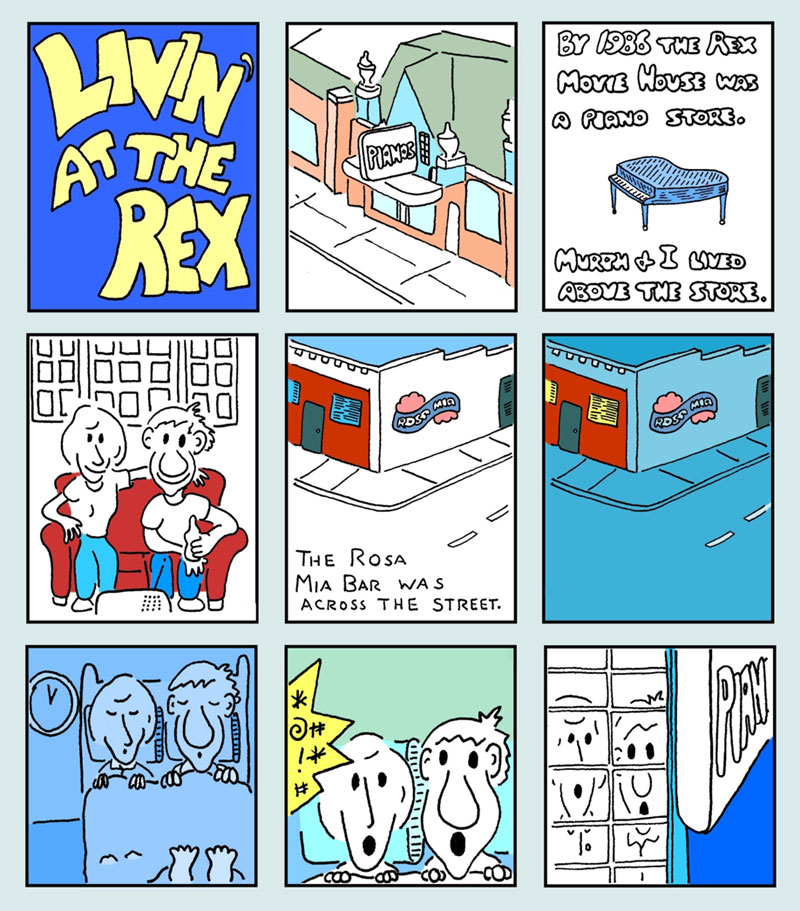 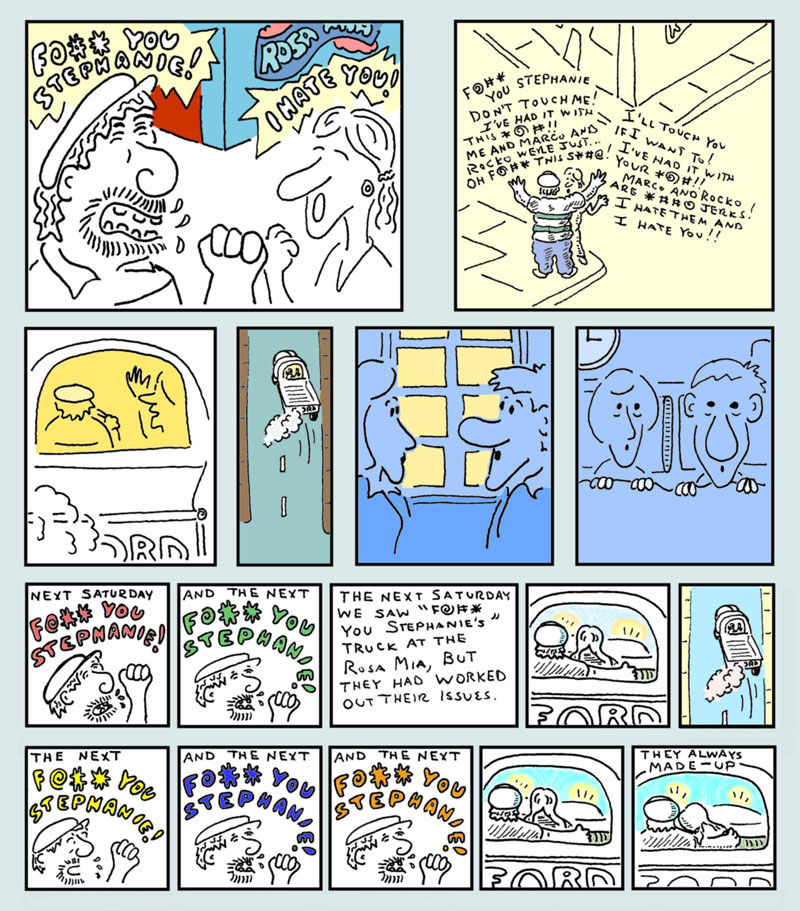 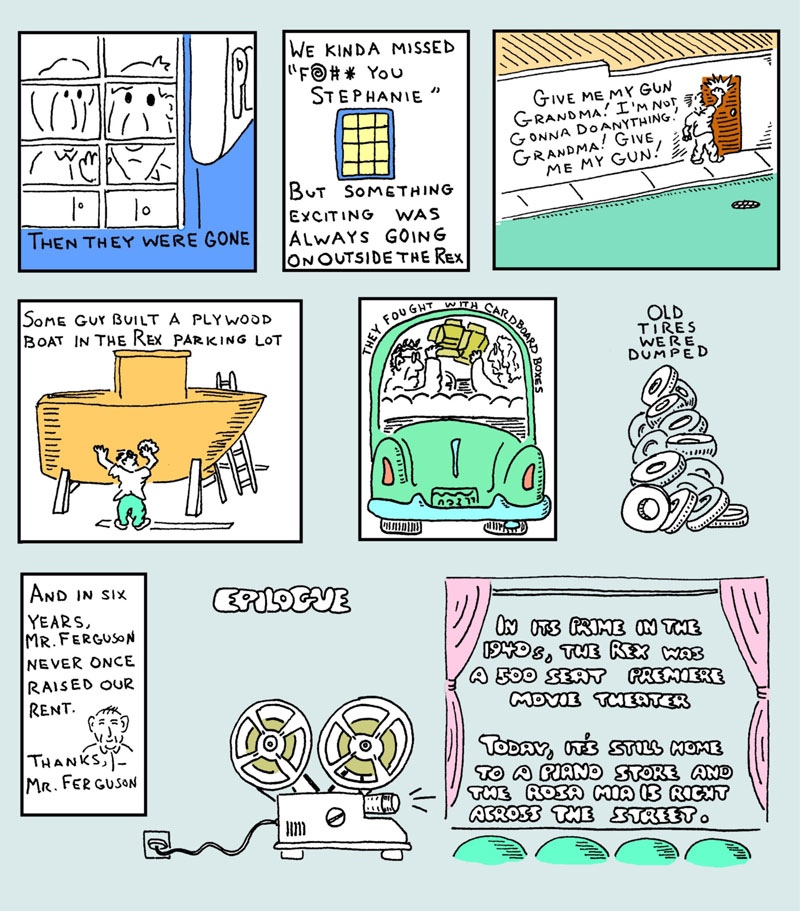 Matt and Murph still live in the Berkeley Park neighborhood of North Denver.

More of Matt Holman’s cartoons can be seen on his website, Square 1 Comics.