Denver’s own Mamie Doud Eisenhower was the First Lady of the Untied States and held the position with style and grace for both of her husband’s terms, from 1953 to 1961. One biographer said “…the world never really knew Mamie Eisenhower…as she was perceived as quiet and reluctant to serve the media.” Yet Denver knew her and loved her; she was one of our own.

Mamie Geneva Doud was born in Boone, Iowa, on November 14, 1896, the daughter of John Sheldon and Elvira Matilda Carlson Doud. The family moved to Cedar Rapids, Iowa the following year, where Mamie’s father started his own meat-packing business. Very successful, the Doud family moved to Colorado for opportunity and to ease a medical condition effecting Eleanor, one of Mamie’s three sisters. The family lived for a brief time in Pueblo and Colorado Springs, before moving to Denver in 1905, where the Doud family lived for the rest of their lives.

With his successful business and investment holdings, John Doud was able to pay a little over seven thousand dollars in cash for his home at 750 Lafayette Street, in Denver. This is the home Mamie would grow up in, the only family home she would know and recall with great fondness, the home she would later be married in. This home, so rich in family lore and history, would remain in the family until the death of Mamie’s mother, in 1960.

The Doud family were well known in the community as being fun-loving, involved with their neighbors, a caring, loving family, with deep religious commitments. They attended church in the community, where they often helped the needy. Mrs. Doud was the cornerstone of the neighborhood “women’s social tea.” This amazing woman organized regular social events in the neighborhood, usually hosted in her home. Among the neighborhood housewives included in Mrs. Doud’s teas, was my great grandmother, Olga Berglund. She often spoke of the kindness, generosity, and more importantly of the ordinary manner the Doud family preferred.

In keeping with the community lifestyle, young Mamie attended Denver’s public schools, Corona Elementary (later named Dora Moore Elementary), and then went on to graduate from East Denver High School. At her parent’s insistence, she completed her education at Miss Wolcott’s, a prestigious, private finish school for the daughters of prominent Denver families. During all of her schooling years, Mamie attended dances classes and piano lessons. As a young teenager, Mamie and her friends often took the trolley to Colfax Avenue or Curtis Street, popular teenage hangouts. They would shop, attend various shows or movies, snack on sodas and ice cream at Baur’s shop.

Despite the ordinary lifestyle the Doud family tried to maintain, photographs of the popular “Miss Doud” appeared frequently in the Denver Post’s society pages. After all, the Doud family was a prominent family in Denver, and at times as these things often happen, the Doud family actually brought the attention. For instance, when John Doud bought a brand new car in 1914 (at a cost of four thousand dollars), it was the talk of Lafayette Street. I remember my great grandmother talking about it some sixty years later, it really was a major event. Mamie was seen and photographed driving the black vehicle with plum interior around town to Cheeseman Park, Washington Park, Elitch Gardens and occasionally to the Wolcott school. Mr. Doud kept that car all his life and today it is on exhibit at the Eisenhower Museum in Abilene, Kansas.

For the last four years of Mamie’s teenage years, the Doud family spent a portion of the winter months in the warmer climate of San Antonio, Texas, where the family had a home. Mamie disliked the trips, as it took her away from her friends in Denver. However, that thinking soon changed when she met a young West Point graduate.

It was at nearby Fort Sam Houston in October 1915, that Mamie was introduced by mutual friends to the striking Second Lieutenant, Dwight D. Eisenhower. Both say there was an instant attraction to the other. Of that first meeting, Ike would later say, “…a vivacious and attractive girl, saucy in the look about her face and in her whole attitude.” And of Ike, Mamie would say, “…he was different…I think his vitality appealed to me.” The young officer, just out of West Point, courted young Mamie with patience and steadiness of character, and in the end the Denver socialite was won over. He got on well with the Doud family, frequently visiting their Denver home.

When the couple announced their engagement on Valentine’s Day 1916, the occasion was bittersweet. Ike marked the ceremony by placing a miniature copy of his West Point ring, an amethyst set in gold, on Mamie’s finger. However, the news astonished Mamie’s Denver friends. It was their opinion that Mamie was marrying beneath her class. West Point graduate aside he was still just a soldier, they said. And, while the Doud family had a fondness for Ike, John Doud had a stern fatherly talk with his nineteen year-old daughter about life as an Army wife. In the end, Mamie’s strong will and good sense won out, as she later said, “…I was willing to accept whatever would come.”

The Doud home, on Lafayette Street in Denver was the scene of the wedding, at noon on July 1, 1916. The wedding was a grand event, yet held to the Doud family values of respectful modesty. Only family and close friends were in attendance. Even so, my great grandmother later recalled, the narrow street scene on Lafayette was crowded and impassable due to all the vehicles.

The wedding ceremony was simple in style, yet strong on family and religious values, when Ike pledged his vows and took Mamie as his bride. Mamie was radiant in an ivory laced gown, escorted down the family staircase by her father. Ike was equally splendid in his dress white military uniform, completed with sword and stars and bars of rank. Following the ceremony, the new couple enjoyed a ten day honeymoon, spending the first days in Colorado. Then, the newlyweds left by train to Abilene, Kansas for a brief visit with the Ike’s parents.

Looking back in history, this was perhaps Denver’s finest hour in the first decade of the 20th Century, yet no one in Denver or the nation knew at the time how important this union was, or how fortuitous it would become in later years. 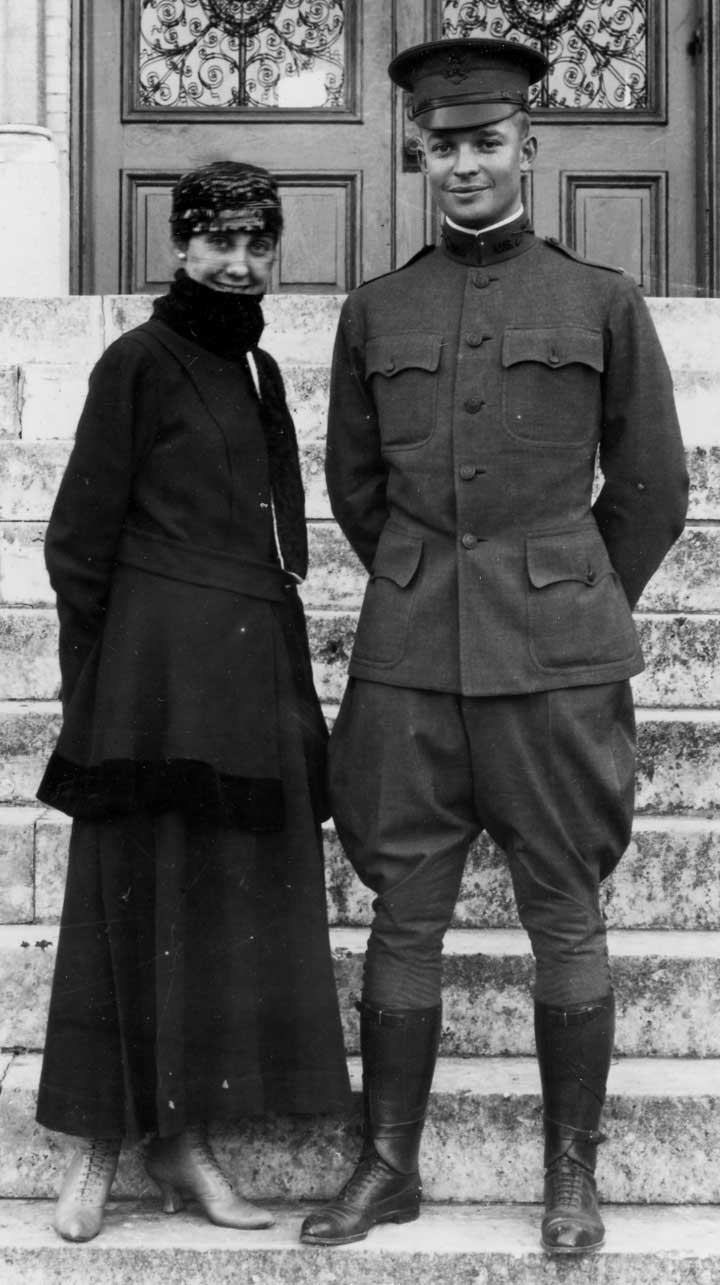 B50 note: Linda Wommack is a denver-based writer and historian. She is the author of From the Grave: A Roadside Guide to Colorado’s Pioneer Cemeteries among other books, and is a frequent contributor to True West Magazine.